Tonight, news came that the British band Anathema decided to go on an indefinite hiatus (aka split up) after the challenging year that 2020 was.

I admit it makes me sad. The band and their music mean/meant a lot to me.

I was young, barely 16 years old, when I heard my first Anathema song. It was on the free CD Rom that came with a music magazine; the magazine was called “UP”. The first listen of the CD was done in passing and without much interest, but something – a line in the song, made my ears perk up, and I listened again from the beginning and watched the video. Again. And again. On repeat for days.

Later I learned from the small article in the magazine that it was a promo shot for the band’s upcoming album “Judgement” released in 1999.

Imagine young and excited Cathy practically running to her trusted record dealer to buy the entire back catalog, only to be disappointed to find out that the store only had one album in stock. I had no idea that Anathema had been around for years and that their music had evolved considerably in those years too. No one I knew had ever heard of this band. And I was sure that I had discovered a gem. Little did I know that this band and their music would be a soothing and comforting companion for decades.

The first album I finally bought was called “Alternative 4”. It had been released in 1998, and the melancholy gripped me right away. But there was more to it; there were guitar riffs, piano, lyrics… I had never heard anything that touched me in that way. True, I was only fifteen, but all of a sudden, I felt a positive intensity that had not been there before. And I liked that feeling very much.

I was hooked on the music. I didn’t know nor cared about the people making the music. But I cared about the lyrics that touched me right in the feels. Mind you, this was before everyone had access to the internet. My knowledge came from expensive music magazine with monthly issues. I was not fangirling over any of the band’s members. It was just the music. I could not grasp half of the emotions that were sung about yet, but the other half were very familiar.

From there on out, Anathema had a song for every feeling; they had lyrics that reflected my emotions. I felt understood; I felt home. And wow, was that a powerful feeling for a young starving mind as mine. Coming from a broken home, including emotional neglect and abuse, these songs felt like a warming and welcoming blanket. Very far removed from the angry music I had listened to before.

In the year 2000, I visited Paris for the first time, and of course, we had to visit the Virgin Mega Store. It was heaven on earth. I was in paradise. It was where I bought the older Anathema albums. Very different from what I knew by then: still melodic, still meaningful lyrics, but growling, screaming vocals. Not really my cup of tea. But also, it showed me that progress is good. Change is good. And trying and daring to go in a different direction than every one expected seemed possible for the first time ever.

And the band kept releasing fantastic album after fantastic album. Their creative well did not dry up. Year after year, they released songs and albums that became classics in their own right. And even when their record company dropped merged with a different label and decided to drop some of the smaller bands and artists, they continued to create and breathe music.

Between the albums “A natural disaster” (2003) and “We’re here because we’re here” (2010), seven almost silent years passed; at least for me, who was not interested in any band drama and still chose to not buy into any false rumours read on the almighty internet. In 2008, a compilation with new versions of old songs was released: “Hindsight”. It made old songs appear new and showcased the fact that there was not one weak song.

The silent period was a period of change, and the band toured a lot and all over the world. The quality of their playing benefitted of it, definitely. Or so I personally believe.

In 2012, the masterpiece “Weather Systems” was released. I squealed when I noticed that Anathema would tour Luxembourg with this album. For me, they reached their creative peak with this one. Maybe it is also their most commercially accessible album, even if the style is more progressive. With the help of a new producer who pushed the band to step even further out of their comfort zone, an exceptional record was made. It opened the doors to a new generation of fans.

A live album followed. “Universal”. It’s not a perfect album by far, the first minutes are filled with little slips, and the nervousness of the band is palpable. But it is also one of the few live albums that let me feel the energy even though I was not there in Bulgaria. The songs the fans know and love were arrange with a classic orchestra. Strings added an extra special atmosphere to the songs. An intense album indeed.

The sound evolved further. More electronic elements found their way into the music of Anathema. On the album “Distant Satellites” (2014), other new classics can be found. The album in its entirety, did not appeal to me, but several songs and their stories caught me off guard too. And that’s all one can ask for.

“Anathema” is a song for and about the band; at the same time, it is very universal too.
In 2014, I saw the band for the second time. It was at that gig that I planned my memorable trip to Brussels to see Her Name is Calla. So many memories are related to Anathema and their music. They are intensely attached to my life.

But when they release their 2017 album “The Optimist,” they kind of lost me. Maybe I had grown? Maybe too much happened. The band claimed this album to be their best yet. A sequel of sorts to the 2001 album “A Fine Day to Exit”. The album did not really grab me. I wrote a (positive) review about it, it can be found on this very blog too. And yet, I couldn’t pass on the opportunity to see Anathema live again. This time, I went all by myself. I wrote a post about that gig. I was in the middle of a depressive episode; maybe that played an essential part in how I perceived that night too.

In 2014/2015, Daniel Cavanagh, founding member, songwriter/multi-instrumentalist of Anathema, launched a crowdfunding campaign for a solo album. It consisted of cover versions that held memories and meaning for the artist, hence the name “Memory and Meaning”. Of course, I supported one of the people who influenced most of my life. I ordered a handwritten lyric sheet for the song “Everything”. 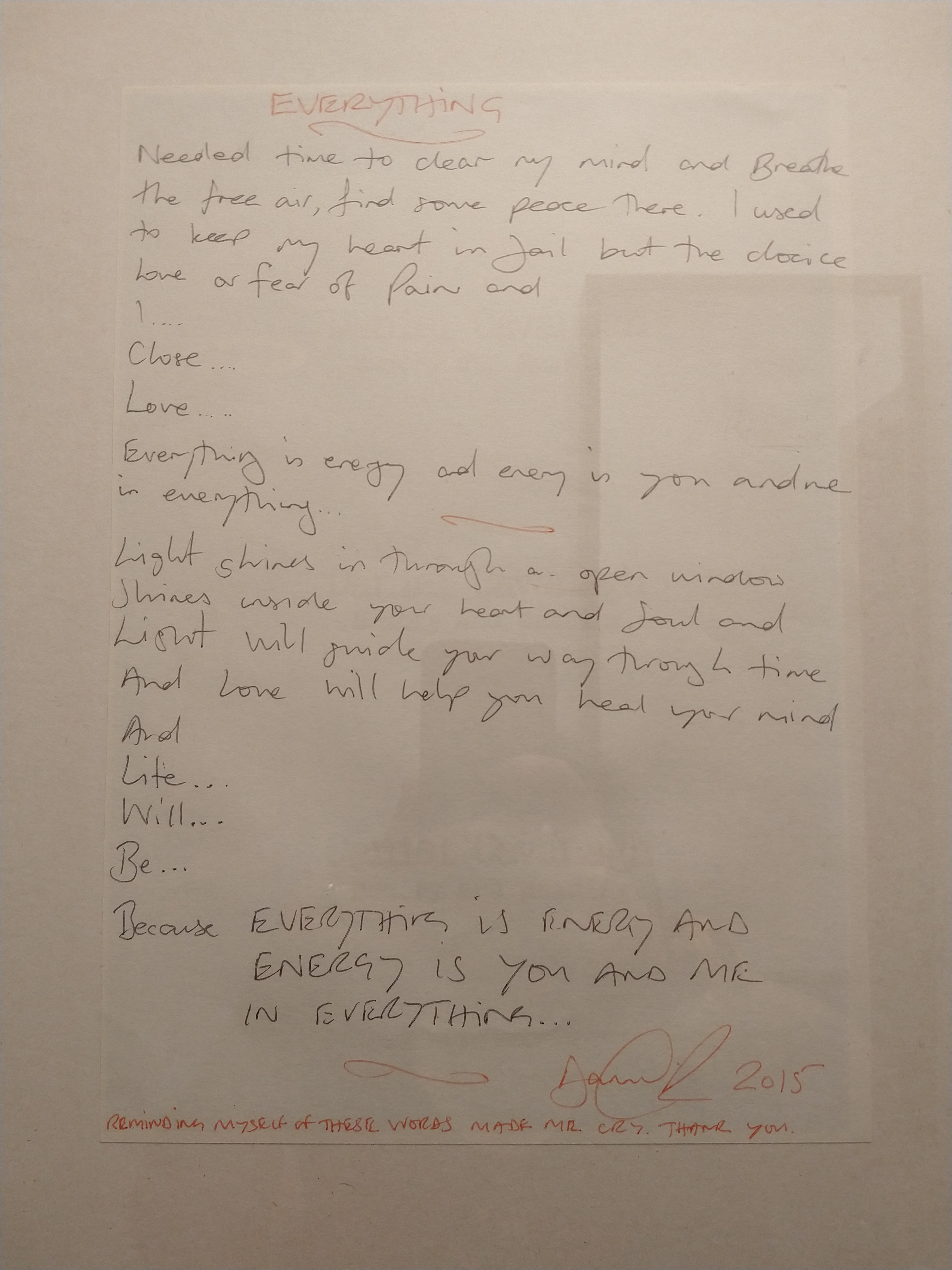 It is framed and has a special place in my home. A funny one too: it hangs on the wall of my guest bathroom.
As a surprise, the father of my kids ordered a personalised song that was sung just for me. It was “Forgotten Hopes”. And although it is not the best and it sounds as if he was sitting in a tank, I adore the personal dedication and the way Dan said my name. I sent an email to thank him for the note written in red on the lyric sheet, and wouldn’t you know, he replied in a kind way. Bless him.

A long post just to say that I am sad today. I can’t imagine a musical world without Anathema in it. And I seriously hope that every member of the band will find happiness, love, (mental) health, hope, and new ways to be creative. I am sure a decision like this was not made lightly and impulsively. And who knows, maybe they will reunite in a couple of years. Every member of the band has music in their veins, and I am convinced that there is more to come.